First book in the library is “Desert Encounter” (Ørkenen brænder) by the Danish journalist Knud Holmboe. It is a travel story about is journey in car from Morocco to Egypt in 1930. His meeting with the Bedouins and Islam and the cruelty he see performed by the Mussolini’s Italian colonial power in what today is known as Libya. It is an exciting tail of a curious man’s discovery of himself, the world and the dessert’s shifting nature between danger and beauty. 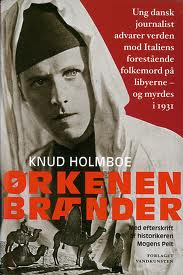 The original text no longer holds copyrights and can be found on this page in English and Danish: www.knudholmboe.com

For further reading about Knud Holmboe his last journey to Mecca and mysterious death in 1931 on the border between Jordan and Saudi Arabia. I will recommend “Paa Spor efter Knud Holmboe” (On the track of Knud Holmboe. It is not translated to English) by the Swedish journalist Willy Falkman. He travels in 1932 to Jordan to find out what happened to Knud Holmboe.